Time is linear. The past is what went before and the future is what lies ahead. We can’t change the past. It happened and we have to get over it. We have to move forwards into the future. Right?

But what if we could return to significant moments in the past where hard, terrible things happened and whisper things to our hearts – things about how we can cope, things about ideas that were formed then on shaky foundations – what if we can pray for ourselves as we were. Would we feel differently in the present if some of the falsehoods from an abused past hadn’t haunted our present day lives?

Sometimes, someone says something to me, and it takes me back to a moment. A hard moment. Something unresolved. This is generally known as a trigger. It’s like a hard-wired link, and affects many of us as if there is a physical connection that is turned on by a word, an action, a reminder of something that once occurred, and suddenly all our responses, all our reactions are affected by that moment, right now in our present day life.

I used to experience these triggers all the time and just had to apologise for my over-reaction, explain that I was triggered by this comment, look, expression, circumstance etc.

But one day I wondered what would happen if, instead of feeling trapped by the connection and vulnerable in the present moment, I went with it. Allowed the trigger to be fully connected, actually embraced it. I began to journal about it.

Something changed. Instead of these triggers feeling  like a sudden jolt that I wanted to get away from as quickly as possible, as if I was about to be hurt all over again and had to put all my energy into fleeing, I began to get by myself and go within and remember the moment this trigger connected me to. Instead of running I stayed. I allowed myself to remember. I allowed the 'trigger' to become a portal to healing.

I began to record the event of the past or the words that were said and visualise myself as that hurt, damaged child. But more than that, I remained my now-self and instead of just recording this as a memory, I allowed what I know knew to speak into that moment. I saw it as a sort of Dr Who and the Tardis, time-travelling kind of thing. I figured, who’s to say this can’t help? Who knows? What do I have to lose?

So I spoke to the child within who was hurt and I cared for her in the moment I was remembering. God (my sense that there is something bigger than me), of course stands outside of time.  What if in visualising, and caring for the vulnerable and wounded child I was, I could impart some hope, some strength to her? What if it helped?

So I did. Each time I would experience a trigger I became actively involved in it.

Instead of hiding and trying to move past it as fast as possible, instead of playing the old distract/avoid games of the past, I began to see these triggers as an opportunity to redress ways in which I had built my life on the wrong, on a damaged foundation.

Anger was, for me, a terrifying thing. One of the things that would send me into a tail-spin was people being angry - with me or even just around me. It would trigger panic and fear and all I ever wanted to do was to run and hide. I could not be assertive, could not defend anything, had no voice at all. I was a small child hiding under my bed waiting for the angry words to cease, hoping to not get caught in the cross-fire.

But first I had to speak to the frightened child hiding under the bed. I told her things – important things – you might get hurt but you will be all right. It’s not your fault. Grown-ups are fighting but it’s not because of you – you don’t have any power to fix everything, take care of yourself down there – and in fact, how amazing that you found ways to stay safe when earthquakes happened in the family and you found ways to protect yourself, feel safe even when the world around your was crumbling. I would speak to my terrified child heart and offer her reassurance.

A strange thing began to happen. I began, literally, to feel different. So different that I couldn’t at first understand it. It seemed that I could reach into the past and not change any of what actually happened, but change the fear, the terror that had remained with me since the events of my childhood.

Calling these events portals rather than triggers allowed me to think of them as providing an opportunity to go back and look at something I needed to face.

I began to grasp that these portals occur because of things that are unresolved. We don’t have to be  victims to them. Instead of allowing these things to trigger pain, look at them as being opportunities to reassess things from the past, an opportunity that you can use.

These days when these moments occur for me - and may I add that they occur extremely rarely now -  I don’t feel as much panic. I feel like I’m about to have an insight, gain some clarity, I feel excited at where this insight might take me.

What was once a pain-filled reminder of the past has become my ally in recovering. And it can become yours too. 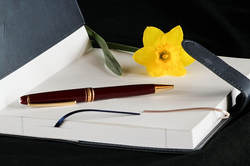 So how can you do this?
My process when I am triggered is to first excuse myself from the situation I am in.

I go somewhere I can be alone and take my notebook. Once I am alone and in a safe place I ask for insight. I ask God ( my sense that there is something bigger than me) to show me what I am afraid of, what triggered the powerful feelings I am experiencing. Sometimes I know straight away, sometimes it is a memory I am very uncomfortable with and it takes a while of calming myself and reminding myself how far I have come in recovering, and then gradually the mist lifts and I can see what I was affected by.

Once I am remembering I try to consider the event from how I was feeling at the time. For me this is frequently the important part, because as a child I coped by NOT feeling, so often the triggers for me lead me to areas where I have made myself not feel things and it is very much an opportunity to unlock long-hidden feelings. These then seem to be able to flow more freely in my present day life.

Here is an example. As a child I was often forced to touch my dad. He would grasp my hand and put it where he wanted it and I was powerless to stop him. He would make me do things then that I hated, that made me feel sick, and all I wanted to do was to run.

A trigger for me to return to those horrific moments when I was so little and so afraid would be the tiny nudge my husband would give when we were intimate, looking to direct me. I would freeze. Panic. Feel suddenly nauseatingly hot. Terror would invade my heart and I couldn’t do anything any more. The moment and its memory had taken over.

In the past that would have been a painful experience. One to avoid. I would have to explain that I’d prefer him not to try to direct me. I would have to apologise for freezing up and killing the moment and though he would understand, and comfort would flow, I wanted it to be otherwise.

Once I opened the portal it actually did change. The thing is that I’m not that small, vulnerable, afraid child any more. I used to have no power. Now I am an adult in a loving relationship and I can choose to do or not do whatever I want.  And I chose to be okay!

I did sometimes feel a little yank, like a rubber band that is being stretched back and let go of, when I was intimate with my husband, but the difference was that I knew straight away what it was and I knew that I was free to choose.

The past is the past and we can’t change it, but we can stop the past invading the present with all its pain as if we are prisoners manacled and chained to a limiting and immovable boulder. And we can achieve that by doing the OPPOSITE of what we have been doing - by allowing the portal to open and going with it rather than treating it as a trigger and running away from it.

♥  ~ Sue
© 2017 Susan Parry-Jones
Next: Self-Care Suggestions
Because we believe that every victim who survives can recover.